We are going to be taking a look at the Law Tactical Gen 2 AR Folding Adapter. This is as good as any piece of gear as they come.  It’s tough, CNC machined hard-anodized aluminum body, means its going to outlast the harshest conditions anybody could place on an AR stock. I run it on my personal built .223 Short Barreled Rifle (SBR).  (Of course, all NFA rules apply).  At first, I built the rifle for sport shooting, but since the evolution of attacks on soft targets, I tote this bad boy everywhere.

According to Law Tactical:

“The Law Tactical Folding Stock Adapter was designed for deployment by vehicle and aircrews and is ideal for low profile transport of AR rifles in non-permissive environments.  The adapter is ideal for any situation that requires a smaller profile weapon.  Simple one-button release folds the stock.  To engage, just unfold and fire.  The stock automatically locks into place, requiring no fine motor skills.”

Recently, I was able to qualify through my department to carry my SBR as an off duty weapon.  Before discovered the adapter, I had a hard time concealing the SBR in my normal backpack.  I was forced to disassemble the rifle into two pieces; so, I looked for a product that would be able to help with this issue. Even though I trained in deploying the rifle while it was dissembled, it became a slow and tedious process. I needed something a little more practical, so I was in the market for an adapter of some sort that could possibly fold the stock on a direct gas impingement AR.  So, low and behold Law Tactical guys saved the day.

I received the adapter at the house about a week or so after Shot Show 2013 and immediately installed it to my rifle. It took me no longer than a few minutes and since then, pleased as hell.  It adds about 1.25 inches to the overall length of the folded SBR, and is fully functional on any carbine or full-length rifle. Many have argued that the weapon cannot be fired when it is in the folded position, but my rebuttal to that complaint is proper training will make the folded stock never an issue. Train as you fight and the folded stock complaint will never be present in your warrior mindset

It took some time to get the hang of deploying the rifle from the folded position. The adapter is made primarily for right-handed shooters and folds to the support side. For those of you shooters who are familiar with the AK folding platforms, this may come as muscle memory with your AR. Although the adapter is made exclusively for the AR platform, it can be used in any calibers from the .223 round to .308.

The adapter has made carrying my SBR a breeze, whether on duty or off.  In my issued vehicle, I can place the rifle in a position that needs immediate access.  Being assigned to the rural portion of a US/Mexican border county, the need for rifle is a must. I have deployed this little guy many times while responding to calls of vehicles running checkpoints as well as drug mules humping the desert with dope.  Being able to carry a stubby .223 rifle with a few extra mags is beneficial in so many ways.

This is an awesome add-on to the rifle and is essential for ops involving entering and exiting cars, bikes, aerial platforms or any situation that would necessitate a folded rifle or carbine.

The guys a Law Tactical have really outdone themselves with this next generation adapter.  This is honestly one of, if not the best, add on to the rifle.  I truly appreciate the Law Tactical guys for sending their adapter out to run on my personal SBR.  I look forward to picking up another adapter for my upcoming 9mm SBR build.  The Law Tactical Gen 2 AR Folding Adapter works, and is a must have for all AR rifle owners!!!

Thanks for the read and remember, Stay safe and keep your eyes on the target.

The Law Tactical AR Adapter is the result of AMERICAN engineering and innovation.  On that note, beware of knock offs made in China and remember to support US tactical companies (read more here)!

ITS Tactical has a great review of the Gen1 version. Check it out.

Parts featured on this build:


Notice: WP_User->id was called with an argument that is deprecated since version 2.1.0! Use WP_User->ID instead. in /chroot/home/bsw/blacksheepwarrior.com/html/wp-includes/functions.php on line 4865 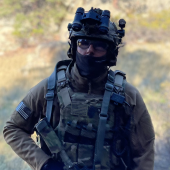 A night out with Adaptive Firearms Institute and ArmaTargets