Green Ops. “Why should your training be any less special”?

It just so happens that I was talking to my good friend Nate from Advantage Training Group about that a while ago and he sent me in the direction of a training company known as Green Ops. I didn’t know at the time, but Green Ops is located here in Northern Virginia, and if you have a chance to attend a solid course, you make the drive.

I went online to check out who and what green Ops were and to say I was impressed would be an understatement. Between Mike Green, the Director of Training, and his Lead Instructors Brett Harnish, and Andy Lander, their collective experience and knowledge really stood out.

Combined they have over 20 years of Military, Law Enforcement and Civilian experience to include:

And I by no means am an expert, but after serving 18 plus years in the U.S. Navy as an FMF Corpsman and the U.S. Army as a Cavalry Scout and Combat Medic with a few tours overseas, I’d like to think I know a few things.

The course began with instructor introductions as well as student introductions. Always good to get to know names and backgrounds, I think it’s a great way to bring everyone in together and enjoy the spirit of training and learning together.

The instructors began our course with about 45 minutes of lecture and they talked about topics such as justification when it comes to shooting both in your home and in public, Castle Law and doctrine, how to mitigate risks, and avoidance/confrontation.

We heard them speak from both professional and personal experiences, and listening to their stories instantly grabbed everyone’s attention. It was extremely easy to listen to them because they took their time and didn’t rush anything, they spoke using terminology everyone could understand and they made it a point to answer any and all questions that were asked.

Mike spoke of his recipe for success also and that consisted of:

At one point someone had asked why they weren’t trying to fill up an overabundance of training slots and Mike Green was very specific about this, and it comes back to his companies’ motto, “Why should your training be any less special”?

Mike feels that in order for you to get the most out of your training and maximize this, that a smaller instructor to student ratio is needed. The crew at Green Ops is big on coaching and mentoring, and with the class we had, over all 15 students split into 2 groups, it was noticeable immediately. Mike, Brett, and Andy were able to constantly walk the line and provide instant feedback where needed.

With all that being said, the crew at Green Ops went into a quick rundown of what our day would consist of, the requisite safety brief, and a gear check to ensure everyone was safely ready to go. After that we made or way down to the range, picked a shady spot (while it lasted), and made ready.

From there we went as a group down to the firing line closest the targets and the Green Ops cadre gave us a much more detailed rundown of some of the drills we would be shooting and in which order (see attached). The Green Ops guys keep it simple, of that no argument can be made. The smaller ratio of student to instructor made it much easier for everyone to ask any questions they had and enabled us to spend much more time on target and dialing in our mechanics and shots.

Mike took the time before we began to run us thru a few malfunctions that we may see and how to properly work thru them. Mike’s patience and clear presentation of these drills was clearly evident as the day progressed.

Before each drill we ran, the Green Ops cadre gave a demonstration to all the shooters to make sure everyone understood the course of fire and what we were trying to accomplish. It was apparent that all of the shooters in the class did what they were asked prior to the class day, as there were no issues whatsoever during the first few strings of fire, which consisted of ZERO confirmation at 50 yards, and a few ready up drills from 15 yards.

Mike and his team though were able to check with everyone as they verified ZERO and during the ready up drills to offer bits of advice as far as hand placement, maintaining a good cheek to stock rest, and proper trigger manipulation.

From there we went into magazine changes and the varying methods with which to do so. The Green Ops cadre was able to provide solid instruction and we went with the crawl, walk, and run method of doing so.  Again, the smaller group of shooters on the line made it much easier for our Instructors to watch everyone as we completed these drills, and provide instant, measurable feedback.

As the day progressed we also worked on target transition drills, malfunctions, shooting positions from the standing, kneeling and prone, some 100 yard shooting positions, and we finished out the day with the El Presidente Drill.

I found that closing out with the El Prez drill was both rewarding and constructive for all the shooters for a few reasons. It was extremely hot that day, well over 100 degrees. Throughout the day between drills we had been pushing fluids and making sure everyone was properly hydrated and ready to go.

Take that into consideration with the numerous drills we ran, and all the information and knowledge we had to take in, and it was a long day. But when they were scoring the targets after the drill was run, it was positively rewarding.

Everyone in the class was sending accurate, well placed shots on target. Mechanics and skills learned were utilized properly, and it was a real confidence boost to our class that we were able to put that all together at the end of the day. And of course the Green Ops Instructors were able to enjoy this as well, they put in a lot of work that day and I can say it’s safe to assume that they were extremely proud and satisfied that it all came together after the final drill was ran.

So there you have it. Green Ops Defensive Carbine is in the books. A very well thought out and executed course. An excellent cadre of instructors, and a class ready and willing to learn and put their new skills to the test.

In a day and age where more and more people are willing to learn how to properly use firearms, I think it’s important to do your homework and seek out legitimate, professional and skilled individuals and/or organizations to get started with.

And for what it’s worth, here in Northern Virginia, Green Ops is where it’s at. 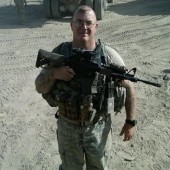 Former FMF Corpsman and retired US Army 19D and 68W. if it involves tattoos, weapons, loud music, bourbon, and good times with good friends then I'm there.

On the Range at Rockwell Tactical – Transition Tips