A few weeks later, Will called me to pick up the Speedbox Endurance 40.  Upon opening the lid, I was surprised to see a sweet care packing which included a personal note and Yeti coffee mug that ended up being perfect for around the house and the office.

The handle is placed well and provides excellent leverage and pulls nicely with a heavy load. I love the heavy-duty hinged lid with a giant built in rubber gasket to keep it waterproof and airtight. There is also a air/water bleed drain that doubles as a drain, just in case you turn the Speedbox into a sweet mega cooler on wheels.

Finally, the Speedbox 40’s latches strap down strongly and don’t appear to allow any wiggle in place, however there may be room for some strengthening of the hinge pin but thats just my opinion and not based on any deficiency or scientific analysis of its load capabilities.

The security conscious among us will appreciate the Speedbox Endurance 40’s,  giant steel lock plates (both sides) for padlocks or other locking mechanisms that satisfy military property regulations (Army Regulation 190–51: Security of Unclassified Army Property).

The Speedbox Endurance 40 was designed by U.S. special forces veterans to be a “Modular Container Systems for Palletized Cargo” for U.S. military personnel. Each Speedbox is purposefully and reliably built to be stacked and placed on the military’s 463-L pallet system and to make unloading mission critical gear in the field easier and faster.

Once I had the box, I began experimenting with putting different types of gear in the Endurance 40, (40 gallon capacity), to see where I would most utilize it in my life. I really wanted to use it as my daily work gear box, to have a portable solution to sensitive or mission critical gear. I threw every piece of useable tactical gear, including plate carriers, AR-15, extra mags, filled ammo cans, battle belt, binos, etc. and still had room to spare.

Unfortunately, the box was too big to be casually in the back seat of my work truck to make sense to me or a passerby. The Endurance 40 wasn’t designed to be used inside the vehicle, but maybe Speedbox could begin working on a design to help LEOs secure and organize their gear. I hope so!

With that in mind, I realized I had two perfect uses that would A. Clear space in the garage or another useless tote and B. keep my stuff organized.  It became a great camping box, it fit all the items that are usually tossed into the bed of the truck for the dogs to stomp on.  I was able to fit my entire first responder kit, fishing tackle, hydration backpacks, extra food, dry supplies, fire starters, dog leashes, etc.  It was refreshing to have everything secured in one place and easily packed up when it was time to go.  It also kept my camp clean, a very important task in Montana bear country.

Ultimately, I decided the most practical use, would be a dedicated range box for the impromptu training sessions or ammo dump days. I currently keep everything I need to go, including multiple filled ammo cans, targets, steel plates, extra magazines, gun cleaning kits, hearing and eye protection, etc.  If I find an hour or two to play on the range, 90% of my gear is ready to throw in the truck and move out.

In between camping trips and range days, I also use the Speedbox in my workout routine. It turns out it makes a great platform for box jumps and a foot holder for sit-ups. Two for one, not bad in my opinion!

Where to Find It:

The Speedbox Endurance 40 is available in both black and coyote brown!

You can get your own deployment/bug-out/ range day/ camp box at Speedbox.us and don’t forget to check them out on: 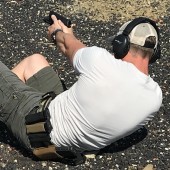 Hendo is a law enforcement professional and fitness enthusiast. He loves great quality gear and is always up for a challenge!