In today’s day and age, it can be often overwhelming and difficult to choose a firearms training program to invest your time and resources into. The cost of admission, travel, ammo etc. can add up quickly. Hence why it’s very important to pay your due diligence when looking for a company to train with; along with the credibly of the instructors. We as students first must ask ourselves earnestly, what skill level am I and what type of training do I need. In Texas, you can’t go far without running into some type of instructor/ training company. So, we must decipher if a company is providing realistic training vs entra-tainment. I hope to shed some light on a group of individuals that are worth considering here in the Dallas Forth Worth Texas area. Here’s a look into TAFTT Urban Carbine.

So, who instructs at TAFTT you ask? Let’s take a quick look at these three instructors.

Brandon served with D company, 3rd Ranger battalion from 09-12 serving three rotations to Afghanistan conducting direct action raids before transitioning to HHC as an assistant team lead for a reconnaissance team from 12-14 for two more rotations working with indigenous intelligence elements. Brandon brings airborne, ranger, RSLC, and sniper school to TAFTT. After the army, he worked with Stand 1 Armory in Dallas as a customer service rep and shooter while working as a TAFTT instructor. He is currently local law enforcement in the Dallas Fort Worth area.

James served with kilo co. 3rd battalion 1st marine division 1st marine regiment 15th MEU during the intifada push into Afghanistan. He then transitioned out and worked as a blackwater PSD driver for VIP and Diplomatic personnel in Iraq. He has since spent his time as a competitive shooter and TAFTT instructor.

Aaron Served with Team 2, Scout Reconnaissance Platoon, HHC, 3rd Battalion, 3rd Brigade, of the 101st Airborne Division over Deployments to Iraq and   Afghanistan. He then worked with Trident Response Group conducting security, surveillance, and firearms instruction in the Dallas Fort Worth Area. He is Currently with the Mckinney Fire Department as a Firefighter/Paramedic.

Now that we have a general idea of who and what TAFTT Urban Carbine is let’s dive into what you all came here for, the deets (details, for all the non-millennials)

We started off the day bright and early at 0900 with a total of 12 shooters. Ranging from numerous returning students to intermediate level shooters seeking to improve their craft. The day started with a quick introduction of the instructors, followed up by students introducing themselves. Brandon then explained the goals for the course and what was expected, and not expected from students. TAFTT Urban Carbine essentially isn’t a fundamentals course per say, albeit fundamentals are discussed to ensure students are on par. Urban Carbine covered various aspects ranging from gear selection, battle zero theory, advance rifle fundamentals, cover/concealment on traditional barricades and 3-D objects; weapons manipulation, team movement and an introduction into self-aid/buddy aid. Think of this course as more of an accelerated course covering multiple aspects of shooting elements tied in with problem solving. Which at the end of the day is TAFTT’s goal of helping shooters to think, process and solve the problem at hand while employing a rifle.

The day continued with James explaining the battle zero theory (BZO) and the different zeroes often used such as: 25, 36, 50 & 100-yard zeros. James preferred a 36 yard zero, but informed students to choose a zero that would work for them and to know their zeroes well. We were allowed adequate time to check and confirm zeros before carrying on. Brandon was up next quickly covering the aspects of sling placement along with 1-point slings vs 2-point slings pros and cons. Most students were already configured in a 2-point mode and had a good understanding of the benefits of a 2-point sling offers over a 1-point.

Brandon and James then discussed stance with a rifle and how best to manage recoil on a rifle platform. Brandon explained that we want to load our weight forward and onto the balls of our feet, strong foot placed behind hip to act as an anchor and help absorb recoil. The stock of the rifle placed in the “pocket” of the shoulder, primary arm elbow tucked in towards body (no chicken wings here) and support arm extended as far out on the hand guard that was comfortable to the shooter. While pushing forward with the shoulder into the rifle and pulling the rifle back into the body with the support arm allowing the shooter to have as much control over the rifle as possible.

Brandon demoed this stance by comparing it to a traditional shoulder to shoulder stance. When firing in a shoulder to shoulder stance he was continuously being rocked back onto the heels of his feet. During the stance, he instructed you could clearly see a difference in recoil control with very little pushback of the rifle, also could be because he’s stacked, anyways where was I. Ah, yes, we followed up with a few low ready/high ready reps along with pivot movements to ensure students had a good proper fighting stance while ensuring their fundamentals were on par and they were conscious of their weapons muzzle orientation before moving onto the next blocks of instruction.

Students were hit with a CQB qualification shortly after, which consisted of multiple strings of fire from the 5-25 yard line and included handgun as well. We were informed that swag would be given to the top shooter. Pressure was on, paper was slayed and results weren’t given till the end of the course; well come back to that later.

After a quick break, we were back at it. Covering multiple subjects from reloads, weapon transitions, movement, partner movement, cover/concealment and self-aid/buddy aid. Each topic was discussed thoroughly, providing the “why’s” behind methods, but reminding students that nothing is absolute. The instructors demoed each topic and drill, before having the students perform (as instructors should.)

During certain blocks of instruction such as cover/concealment. Stations were setup which allowed an instructor to have several students working on a particular drill (v-tac barricade.) While another instructor covered a different drill (vehicle work.) It allowed students to have less down time enabling them to have more reps on drills before switching stations. It flowed well and isn’t something you see often in classes albeit this is dependent on number of instructors, students and range setup of course.

The day progressed smoothly with various amounts of breaks due to the heat bearing down on us. Throughout the course the instructors did a great job of engaging with students ensuring everyone was learning, but having fun while doing so. The instructors bring a unique perspective along with accumulated knowledge from multiple aspects of their careers and experience, combined with a good sense of humor makes for a great day of training.

We continued and were introduced to self-aid/buddy aid from Aaron. He explained the importance of having a basic understanding of the MARCH algorithm which originates from the TCCC standards, but for the class we focused on “M” (Massive Hemorrhage.) Aaron provided varies demoes of applications of tourniquets ranging from the CAT 7 and SOF-TT systems and lesser known tourniquets like the H&H TK4 Tourniquet; which seemed to work well for one handed applications. Aaron talked about the misconception of placing a tourniquet could potentially cause you to lose a limb and basically said, that type information is outdated and there have been numerous studies proving that to be false. When it comes down to it, its life over limb, stop the bleeding and stay in the fight.

As the day came closer to an end, we worked on one last drill that covered multiple elements from partner movement behind various forms of cover to reach a fellow buddy who sustained a GSW (gunshot wound.) Once we reached our partner he needed to be moved off the “X” or our last know position, whatever terminology you fancy; then work through the procedures of applying a tourniquet properly under simulated stress ending the drill at that point.

After range clean up, students shared thoughts, concerns and overall satisfaction with the class and instruction provided by the TAFTT instructors. Brandon then announced the top shot which to my surprise was me (RDS Handguns are cheating, not really), since everyone was a good shot in the class. I walked away with a killer customized ammo can, that was cerakoted black with a laser engraved TAFTT and ETTS logo on each side (I kind of don’t want to put ammo in there now…)

I’ve attended multiple courses from various well-known instructors throughout my career, but was thoroughly impressed by the quality of instruction provided by Brandon, Aaron and James. They focus on pure raw fundamentals while helping shooters understand the whys behind tactics and weapon manipulations. No non-sense flashy drills, purely focusing on keeping shooters accountable for their accuracy while pushing them to test their limits. I can see why now there is a high number of returning students for classes at TAFTT; this surely won’t be my last class with them either.

For more information on Tactics and Firearms Training Team or register for TAFTT Urban Carbine check out their website at http://www.ettsgunrange.com/taftt/ 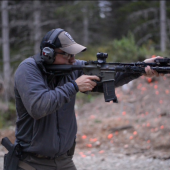